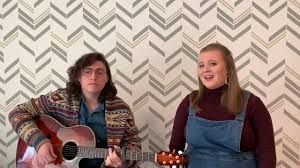 Musicians are experiencing a new kind of whiplash this spring as robust gig calendars have been completely annihilated by coronavirus social restrictions.  Some, like Todd Fulginiti Music (TFM) artist Bailey Fulginiti & bassist Tom Herr, are using the time to reformat and reach new listeners.  The couple, along with their dog Giselle, is sheltering in place in their Bethlehem, PA apartment where they've begun a new video series called Quarantine Covers.  We spoke to them recently via FaceTime.

TFM:  How has Covid-19 affected your music plans for the spring?

Bailey:  Well, it was like having a whiteboard, with stuff written down all over it, and then....whoosh!  It's all gone now!

TFM:  What types of gigs did you lose?

Bailey:  Well you should know since you booked most of them (laughs) but mostly outdoor private events and some restaurant jazz dates.  Tom?

Tom: I had three musicals in a row scheduled, to play bass for.  They're all cancelled.  I was supposed to start rehearsals for the third one this week.  Also a few jazz gigs.

TFM: So what are you doing musically now that there are no gigs?

Bailey:  We've been trying to write more of our own stuff.

Tom: Yeah, we've been trying to make better demos of the originals using Logic. I have more time to work on that stuff now that I'm working my day job from home.  I usually drive about 2 hours a day for work.  We've also been listening to a lot more music.

TFM: So how did the Quarantine Cover video series come about?  Were you planning something like that prior to the social restrictions?

Bailey:  Sort of.  We were trying to find more ways to do music together.  Then, when everything shut down, we basically had two choices:  A- sit on our ass and do nothing, not practice, and slowly get worse, or B- have something that we post, every week, that keeps us accountable and practicing.

Tom: Yeah and hopefully the cover songs will drive some engagement and get us some followers, so that by the time we are recording originals, we'll have some people listening.

TFM:  How do you pick the tunes you're going to cover?

Bailey:  We usually do one that we really like, that may not be super popular, then switch it up next time with something everybody knows.  We're hoping people will like the songs they don't already know, and that it will push them to check out that artist's music too.

Tom:  The other thing that drives our song selection is restriction of instrumentation.  I'm mainly a bass player, but I'm mostly playing guitar on these songs out of necessity.  I'm sort of limited on what I can actually play on the guitar, but there aren't a lot of songs that work for just bass and vocals- so yeah, guitar playing out of necessity.

TFM:  So you're practicing more guitar than bass these days?

Tom: Yeah.  It's good though.  I can get away without practicing bass for a little while because I've done it so much, but guitar is too new.  I'm getting a lot better but I lose it pretty quick if I don't keep on it.

TFM: You've done 5 Quarantine Covers so far, which is your favorite?

Tom:  Mine was the Scott Mulvahill (Fighting For The Wrong Side) because I actually got to play bass and it's a pretty fun baseline to play.

Bailey:   Same.  All the other songs we've done have been trimmed down from their full instrumentation to just vocals and one other part.  But Fighting For The Wrong Side was originally written for just bass and vocals so we could do it as it was written.  Plus, the imagery and story of that song are strong.

TFM:  What was the coolest thing that's happened so far as a result of the Quarantine Cover series?

Bailey:  I didn't think some people would really care about what we're doing, but they do.  I mean people from high school that I didn't really know that well and haven't kept up with.  But they've been like, "Hey I really like these videos!"  It's nice!

Tom:  We've also had a few good retweets.  Scott Mulvahill retweeted our cover of his song (Fighting For The Wrong Side), and P.C. King retweeted our last video.  (P.C. King is a respected musician in the area).  So we got shared by the original artist and a local music hero.

Bailey:  Keeping Gigi quiet!  She's a perfect angel all day then when we start to record she's like (makes whining dog sounds).

Tom: At least half of our bad takes are because Giselle makes a sound, not because we messed up.

Bailey:  Some of the videos we post have dog sounds on them because we get almost the whole way through, then she makes some noise, and we're like, "I am not going through all that again!" 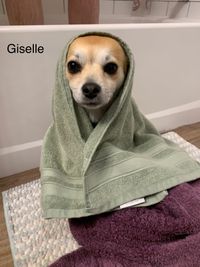 Quarantine Covers is available free on Youtube and is shared on Bailey and Tom's social media pages.  CLICK HERE TO SUBCRIBE.  New covers are released every Monday.  You can contact Bailey via her website or through Todd Fulginiti Music.