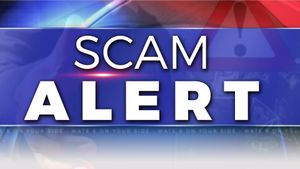 The first bad sign was that the wedding was on Halloween.  But on other hand, I thought something like that could turn out to be pretty cool.  I love Halloween!

It started with an unknown guy texting me, looking for music for his daughters wedding. He said he found my website and noticed that I'm located near the wedding venue, which was a house about 5 miles from mine.  He gave the house address and the hours involved in the wedding.

Naturally, I asked him what kind of music he was looking for and also asked for more specific information about which parts of the wedding he wanted us to play (ceremony, cocktails hour, dinner, dancing, everything).  He didn't answer those questions but just reiterated the times involved.

I got the sense that maybe this guy was not a native English-speaker.  Some of his phrasing, while not wrong, was just a little unusual.  No big deal though.  It was more odd that he seemed to be avoiding any talk about the musical product we were expected to deliver.

A night or two later, I was driving near the address where the wedding was to take place, so I decided to swing by and take a look.  The place was very impressive and huge.   A mansion of a house, with large grounds, a tennis court, and a pool.  And a "For Sale" sign on the front lawn right by the curb.

Halloween wedding, no musical discussion, venue is a house that's for sale.  Nothing felt right or normal, yet I didn't want to jump to any conclusions yet.  So, I googled the so-called father of the bride.  Nothing.  Facebooked him.  Nope.  Googled again.  Still nothing.  Again I thought this was unusual but not unheard of.  I was still naive enough to think that some people have no web presence whatsoever.  My daughter proved that wrong a few days later during a discussion of this potential wedding gig and it's accompanying weirdness.

My next text from the bride's dad said that my fee for the music was acceptable, and that he hopes I can accept a credit card as payment.  I told him I could, provided I could work out a technical snag that had recently popped up.  I also asked him again about music.  His response was that he would like to pay in full, up front, but had a favor he needed to ask of me.  Still nothing about the actual music he was paying for.

The favor started with an explanation that the wedding planner could not accept credit cards for payment, and that was a problem.  His solution was that I bill him for not only my musical services, but also for the entire wedding planner's fee, which was north of $3,000.  Additionally, I was to add a few hundred dollars for myself for handling this favor for him.  I wondered why a wedding planner used to charging fees in that range wouldn't be set-up to accept credit cards himself, and why wouldn't he be the one taking care of the music, rather than Dad.

At this point I should have known for sure that I was being scammed, but I thought about it for  day or two.  It felt wrong, but on the other hand, I've been involved in some pretty innocent situations that have almost gone way wrong due to language/translation issues.  So I was skeptical, but open to the possibility that things were ok, just weird.

I must have "sucker" written all over me because everybody else who heard my story said to end it immediately.  So I did some more research, and it turns out that this guy's phone number is untraceable, not connected to any known identify.  It also turns out that his approach is a variation on what is apparently a pretty common scam.  In simplified form, the father of the bride would convince me to overcharge him for a service, then send the money to a third party (wedding planner).  If the timing works out correctly, I would have paid the wedding planner before the credit card purchase was approved.  I was surprised to learn that, even in today's light-speed world, that transactions can take up to two weeks to totally complete.  In the meantime, I pay the wedding planner, who is presumably a partner in crime to the father of the bride.  Dad's credit is rejected by the banks, but mine goes through, essentially meaning that I would receive a large sum of nothing from Dad, while giving a lesser large sum of cash to the crime buddy.

We hadn't gotten to the point of drawing up contracts or anything, this was all done through texting.  I knew several things about this scene were not right, yet I'm a little embarrassed that I cautiously toyed with the idea for a few minutes before hearing everybody else call to shut it down.

Anyway, I reported the guy to the FTC, took screen shots of our correspondence, deleted the text strain, and worked on booking another gig- hopefully a real one this time.